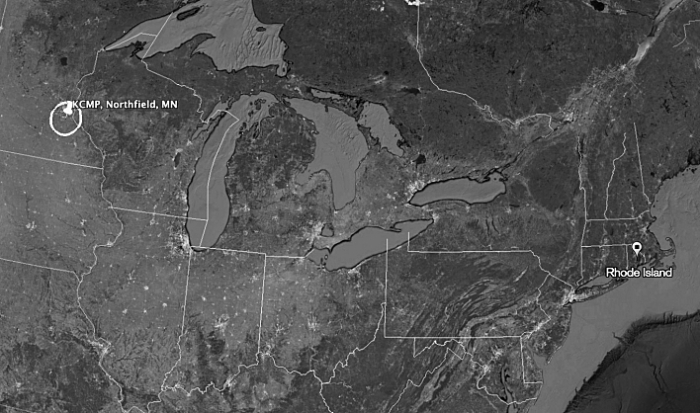 We love music even more than we love beer [heresy!], and we’ve always loved listening to music on the radio. These days at the Bottles & Cans desk, we listen to a radio station that is located 1363 miles away from where we type: The Current, from St. Paul, MN. The station is celebrating its 10th anniversary, and we were thrilled to be asked to write about the journey that led our ears to KCMP/89.3 FM, and what it’s like to be steeped in the culture of a place that is halfway across the country.

We’ll get back to beer on Wednesday. And we encourage you to try The Current!

We’re going to take a brief detour from the beer world and dedicate an item to our all-time favorite band: R.E.M. [though beer does get a shoutout].

On their last three world tours, Michael Stipe welcomed fans with the declaration, “We’re R.E.M. and this is what we do.” These days, three years after their amicable dissolution, their motto could be “We were R.E.M. and this is what we did.” A few months ago, they cleared out the audio vaults with the digital release of 50 rarities from their I.R.S. days [1982-’87] and 131 semi-obscure tracks from the Warner Bros. era. Now they’re serving up REMTV, a six-DVD box set encompassing three decades of material from MTV, bursting with live shows and related coverage — anchored by a terrific new documentary, R.E.M. By MTV.

MTV debuted in 1981, a few weeks after R.E.M. released its first single [“Radio Free Europe”]; both endeavors quickly evolved and made a significant impact on the music world. R.E.M. By MTV lets the band tells its own story [there’s no narrator], from their modest beginnings at the University of Georgia in Athens and their first show in 1980 at a party in a former church. “It was a typical Athens story,” drummer Bill Berry says. “Four guys meet at a party and want to play other parties and drink beer and have fun.”

The party led to a remarkable career — from textbook indie rockers to one of the biggest bands in the universe — which is masterfully rendered in R.E.M. By MTV ’s 105 minutes [culled from more than 1500 tapes by director Alexander Young and editor David Leopold]. All the touchstones of the band’s resume — and parts of 80 songs — are highlighted: the perpetual touring, the boost from college radio, the critical support [Rolling Stone cited Murmur as the best album of 1983, above Michael Jackson’s Thriller and U2’s War], the transition from small rooms to enormous spaces [which forced Stipe to perfect the “stadium gestures” he had joked about when the band was playing to hundreds instead of thousands], and using their fame to espouse causes [environment, pro-choice, handgun control, Rock the Vote].

The doc takes a bit of a Behind the Music turn [without the sordid drama] with Berry’s departure in 1997 [two years after having a brain aneurysm at a concert in Switzerland] and the remaining members’ subsequent lack of focus on their next three records, before their artistic rebound on Accelerate and their final disc, Collapse Into Now. Each step is soundtracked with excerpts of compelling and masterful live performances.

In most of the interview segments, the band is self-deprecating. Guitarist Peter Buck notes, “People tend to think of us as this mystic art band [makes praying hands, looks to the sky] — ‘Please, give us another record!’ — when in fact we’re just four guys,” and Stipe says, “It’s just a pop band at the end of the day. It’s just a rock show, after all.” But beneath the pooh-poohing, it’s clear that they are genuinely proud of their musical alchemy. The story is told chronologically but the insights crosscut through the years — for instance, a reflective 2008 Stipe quote echoes the notions of bassist Mike Mills musing about the band’s potential in the mid-’80s.

After a private screening of R.E.M. By MTV in NYC on November 6, Mills said, “I feel like I just watched myself being born again.” Longtime fans will be captivated by the band’s baby pictures and graduation to the big time, and the documentary should convert viewers who missed out on the band’s thrilling ride.

The other five discs of REMTV offer more than 12 hours of engaging and enlightening material, including the 1991 and 2001 MTV Unplugged shows; a Storytellers appearance from 1998; segments from The Cutting Edge, Live Wire [Nickelodeon’s take on American Bandstand], and awards shows; and nine live performances from 1995 to 2008 [with numerous outtakes from all of the original airings]. There’s a lot of overlap: you’ll have the opportunity to parse the nuances of 11 takes on “Losing My Religion” and 10 “Man On the Moon”s. The final concert is from Athens, Greece [from Athens to Athens, nice] which was filmed six weeks before their last show in Mexico City on November 18, 2008. The spirited set underlines the statement by Bill Flanagan, EVP of the Viacom Music Group and one of the documentary’s executive producers: “R.E.M. started great, stayed great, and ended great — here’s the evidence.”