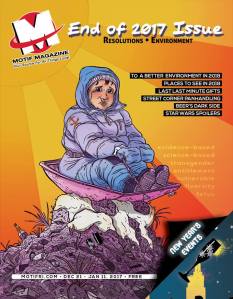 In our column in the brandy-new End of 2017 edition of Motif, we look back on the highlights [new and bigger breweries!] and lowlights [the downfall of Doberty’s] of the 401 beer world, and quote some inspirational Big Picture words from Brian Oakley.

Click here for the words and/or click here and flip to page 8 for the Virtual Newspaper Experience.

Cheers and happy holidays and alla that . . .

Xmas is one week from today. And you can be a super Santa if you purchase tix for a coupla fantastic fests in the New Year:

The seventh annual Newport Craft Beer Fest will take place on April 27 [VIP session at Newport Storm] and April 28 [two sessions on the lawn of the Great Friends Meeting House]. Tix are on sale now; get ’em here.

And the second annual Bacon & Beer Fest, produced by the dynamic duo that brings you Beervana Fest, will be happening on June 10 at the Steel Yard in Providence. B&B features bacon-inspired dishes from 25 local restaurants paired with a beer from 25 world class breweries. Tix for that bash go on sale today [12.18] at noon; the first 250 tix will be sold at $10 less than the regular price. Get more info here and go here to buy tix.

The DecemBeerFest will make its debut on the 401 Beer Fest Circuit on Friday, December 29 from 6:30-9:30 pm at Rhodes-On-the-Pawtuxet in Cranston. It’s a welcome diversion in the midst of the holiday revelry — and hey, another excuse to drink! Here’s the lineup of participating breweries [more TBA]:

Tix are $45 in advance [unlimited sampling/commemorative glass/bottles of water] and $15 for designated drivers [$60/$25 at the door if any of the 700 tix are left]; the fest will also have food from the Great Northern BBQ Co. and Mr. Tuna, and a soundtrack by DJ RJ. Click here for more info and a link to the purchase page.

This just in from the Brewers Association, “the not-for-profit trade association dedicated to small and independent American craft brewers”:

This release just hit the inbox:

Bill Nangle, of North Smithfield, RI, started the Rhode Island Brew Bus in 2014 after completing his last semester at the University of Rhode Island. Since the first all-inclusive tours started rolling later that year, thousands of guests have visited many of the 20 different brewery and winery partners that are part of the multiple weekly itineraries.

“The past few years as owner of The Rhode Island Brew Bus have been so rewarding,” said Bill Nangle. “Our partnerships have grown and our reviews speak for themselves. I take pride in the product we put on the road every weekend and want to see our tours and partnerships continue to grow. Stepping away from the company was not an easy decision, but I feel it is what is best for my family, career, and the future of The Rhode Island Brew Bus,” he added.

The purchase in Rhode Island adds a major new territory in Southern New England to the growing Maine Brew Bus company based in Portland, Maine. In 2016, they added tours in Boston, MA, operating as Mass Brew Bus, and earlier this year they acquired a competitive tour business in their hometown. Terms of the acquisition were not disclosed.

“I am excited about the opportunity to bring what we have learned about beer tourism over the past five years to an already existing operation in Rhode Island,” said Zach Poole. “After visiting the area and conducting extensive market research, we’ve learned that Providence is a great city and the beer scene is definitely growing across the state. We look forward to bringing more guests through the doors of both new and established breweries in the Ocean State”, he added.

The new owners of the Rhode Island Brew Bus also announced they are opening a Providence business office at 383 West Fountain Street, Suite 113, right next to Bayberry Beer Hall.

Existing tour operations with the two buses in the fleet will continue as planned, with an expanded tour schedule introduced after the first of the year. The five part-time employees that are currently providing tour operations will continue to work for the new ownership, and it is expected that other staff will be added in the coming months. All guests that are currently booked on tours with the Rhode Island Brew Bus will not see any major changes to their beer travel plans.

About The Maine Brew Bus and Rhode Island Brew Bus

The Maine Brew Bus was founded in September 2012 by Zach and Allison Poole, who realized that people visiting Portland might enjoy all-inclusive tours on bright green school buses that provide a behind-the-scenes look at Maine’s craft breweries, distilleries, wineries, and more. Tours are led by expert guides in addition to a knowledgeable non-drinking driver to ensure the best possible experience for participating guests as well as for the businesses with which they partner.

The Rhode Island Brew Bus was founded in 2014 by Bill Nangle. After completing his last semester at the University of Rhode Island, he wanted to start his own business. As a home brewer and a craft beer enthusiast, and after being inspired by learning about The Maine Brew Bus, he started Rhode Island’s first brewery tour company. The all-inclusive tours are run on Fridays, Saturdays, and Sundays around the state of Rhode Island and parts of Connecticut. Private and corporate tours are available for booking on other days of the week. 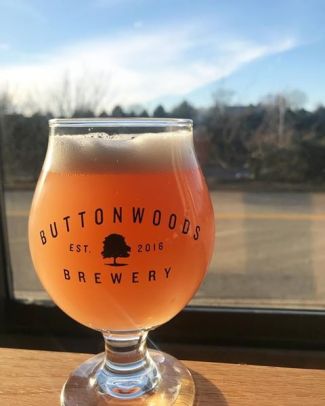 The latest addition to the 401 brew crew is having its Grand Opening at its palatial estate at 530 Wellington Ave, Cranston. On Monday [12.4], Morgan Snyder made the announcement on Buttonwoods Brewery‘s Fbook page: “It’s official, folks — we’re a fully licensed brewery. We’ll be kicking off tasting room hours on Saturday December 9 from 12-9. Hope to see you there!”

Initial offerings include Almost There, “a testament to our journey of opening a brewery. Every little step towards our goal we would celebrate by exclaiming,’We’re almost there! and now we are! Almost There is 4.9% Belgian saison, our own little take and homage to or favorite beer, saison DuPont, it’s almost there”; Coming Out, an IPA made with Galaxy and Motueka hops which Morgan notes “is a one and done IPA we brewed specifically for our opening. We’re brewing with the gloves off on this one”; and “a kettle sour, named after our trusty truck Old Gerty, fermented with 100% Brett and conditioned on heaps of local RI blueberries.” [On Tuesday [12.5] he added: “We sent some kegs out to distribution through our distributor The Wine Bros. Keep your eyes peeled for us on tap this week at your favorite bar or restaurant.”]

Cheers to Morgan on clearing all the red tape and finally getting there! It’s a wonderful Xmas present to hisself! Check BB’s Fbook for updates.

Norey’s [156 Broadway, Newport] is ho-ho-hosting its annual Winter Tap Takeover. The seasonal treats, including many rare imports, will start pouring on Friday [12.8] at 4 pm and be available until the kegs are kicked.

In our column in the brandy-new edition of Motif, we have a sleigh-full of intel from Crooked Current, Foolproof, Whalers, ‘Gansett, Newport Storm, Bucket, Buttonwoods — which will be opening on 12.9; check their Fbook for details — Proclamation, and more.

Click here for the semi-scoops and/or go to the homepage and click Newest Issue at the top of said homepage for the Virtual Newspaper Experience [which hadn’t been loaded on said homepage when we hit “Publish” but it’ll be there soon, really!]

Today is Repeal Day, the 84th anniversary of the ratification of the Twenty-first Amendment, which overturned Prohibition in 1933. As the RepealDay.org site eloquently states, “The thirteen years of Prohibition were a dark time for the United States, as the criminalization of alcohol led not only to a rise in civil delinquency and organized crime, but also to the loss of customs associated with the production, preparation, and consumption of alcohol. We celebrate Repeal Day because December 5th marks a return to the rich traditions of craft fermentation and distillation, the legitimacy of the American bartender as a contributor to the culinary arts, and the responsible enjoyment of alcohol as a sacred social custom.”

On December 5, 1933, Utah was the 36th state to ratify the Twenty-first Amendment, which trumped the 18th Amendment, which had prohibited the manufacture, sale, and transportation of alcohol since 1919. Here’s the local trivial trivia: Rhode Island was near the front of the line to get the 21st Amendment passed: Congress proposed it on February 20, and on May 8 Rhody was the third state to sign on [after Michigan and Wisconsin]. As our pal Coach Donovan noted when we posted this info a few years ago, “not only was RI among the first to sign the 21st Amendment, but it never ratified prohibition in the first place — never signed 18th!”

Cheers to the spirits of freedom!

And if you’re reading these words nowish [8:14 AM], here’s a musical suggestion to toast the day:

Two-plus years ago [on 4.27.15], we ran the results of a poll which asked, “What brewery would you most like to see in the RI market?” The runaway winner was Lawson’s Finest Liquids, which garnered 28 percent of the vote. And now, patience has been rewarded: the pride of Warren, VT, is now being distributed in Rhode Island by Atlantic Beverage Distributors. We’ll have details on the rollout soon, but we do know that you can find Sip of Sunshine at a few top-notch locations [including Thirsty Beaver in Cranston].